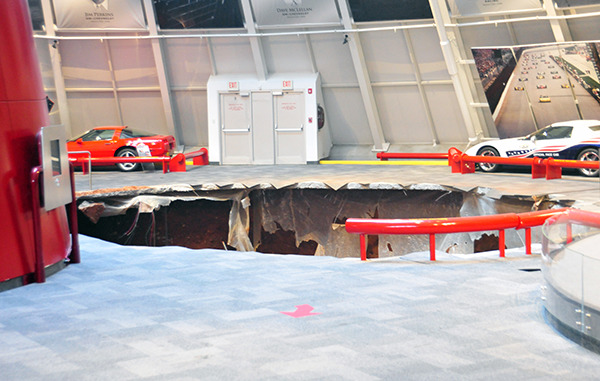 Is Fracking the Cause of the National Corvette Museum Sinkhole? (Updated)

UPDATE 02/12/2014: A representative from the National Corvette Museum describes what he believes actually happened. See his tweet below.

Our area of the country is built on a major cave system. We believe that this was the cause of the collapse, & natural erosion. #motorama

The National Corvette Museum in Bowling Green, Kentucky closed after a large sinkhole developed inside the museum. The museum is where Corvette owners can pick up their new cars as soon as they roll off the assembly line, and it is also a place for enthusiasts around the world can visit to see classic models. There are even plans to build a racetrack on the museum property. However, a sinkhole may have put a damper on those plans as four classic Corvettes were heavily damaged due to the sinkhole. Thankfully, no one was injured. One of the questions is; was fracking to blame?

Eight vehicles were damaged, including a 1993 ZR-1 Spyder and a 2009 ZR1 “Blue Devil” that were on loan from General Motors. The other six vehicles were owned by the museum, and one was the 1 millionth Corvette ever sold. Safety teams allowed the museum to rescue the ultra-rare vehicle, but they have not been allowed to touch any of the other vehicles yet.

Photos: Eight Corvettes Plunge Into Sinkhole At National Corvette Museum… Which Is What Comes Of Fracking: https://t.co/nqj5x6Dyfj

If sinkhole in Corvette Museum was caused by #Fracking, maybe more people will take notice. I mean, Corvette enthusiasts might take action

The process of fracking is relatively simple. Lots of water is injected into the ground at extremely high pressure. That high pressure causes rocks to fracture, providing access to the resources inside and in the area. The waste water is kept underground in pockets, and is generally safe to the water table of the area, according to both government officials and the companies involved in fracking.

Basic diagram from the EPA on the process of fracking.

According to the United States Geological Survey (USGS), Kentucky suffered from a 4.3 magnitude earthquake back in 2012. Considering they are not on a major faultline like California, people wondered what caused it. NPR wrote a great piece on how fracking can cause earthquakes and other geological side effects. Water is used in fracking, and the waste water stays underground in pockets, especially along faults. The water provides lubrication to the faults, which allows them to slip. A slipping fault line then can result in an earthquake. It should be noted this is an extremely rare occurrence, according to the NPR piece, but still seemingly a possibility. 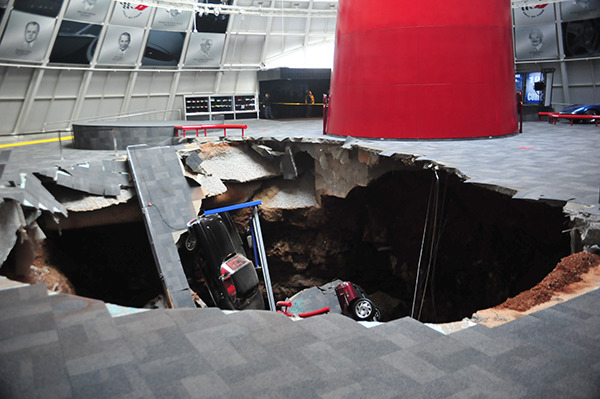 Pictures provided by the National Corvette Museum show the extent of the sinkhole.

We were unable to find a source for a direct link between fracking and sinkholes, but it does seem probable considering what fracking does to the ground. Cracking rocks with high pressure water could just as conceivably cause weakened pockets under the ground as easily as it can cause shifts in faults.

Another possibility is that the midwest is having one of the hardest winters it has ever had, with more snow, freezing rain, and cold temperatures than typically are witnessed. Potholes are caused by water that expands when it freezes, and then contracts when it thaws. If the land underneath the museum was unusually cold, the moisture could have caused the same type of effect, creating the sinkhole.

Eight Corvettes were damaged overall in the sinkhole incident.

A full investigation is likely to occur, especially considering the insurance claim that will be made on these classic automobiles. We will definitely know more when that happens. Hopefully, some knowledge is gained from this incident, preventing it from happening again at the Corvette museum, or in other locations around the globe that are suffering from sinkhole issues.