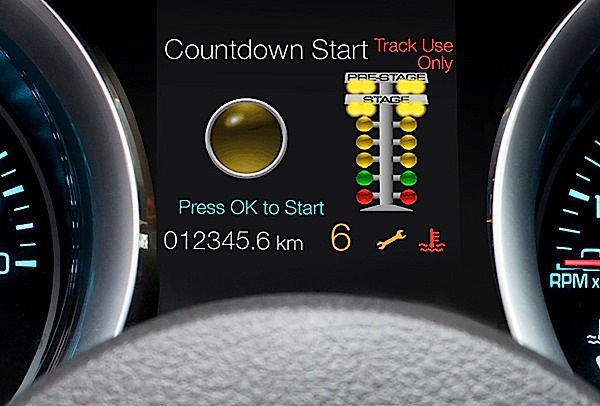 Update 04/24/2014: Motor Authority talked to Brian Cotter, head of Mustang global communications about the issue. He said, “Racing (ex. in a bracket-style competition at a drag strip) would be an issue; testing the capabilities of the Mustang at a test-and-tune day where there is no incentive for fastest quarter mile times (etc.) is permissible. You can have plenty of fun at a track without entering the realm of ‘racing.’ Issues would arise when you are specifically competing against other cars ‘wheel to wheel.’ Testing the capabilities of the Mustang is not an issue.” How they will know if the car was racing is still unknown.

In order to achieve the best grip on the dragstrip, a car’s tires must have heat in them. Hot tires are grippier tires. Racers will do a burnout to generate heat in the tires. Ford will be making this process even easier with the 2015 Mustang and the electric line lock as part of the track apps. Will using the line lock feature, or any track app void your warranty? That might be a possibility.